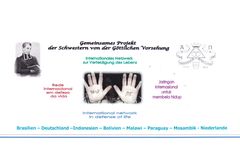 In the Congregational Council meeting in Kloster Nette, September 2016, all Provinces, Regions and the Dutch Community agreed to carry out a joint project.

The target group, which was defined, concerned everybody affected by human trafficking, the migrants and refugees and in particular women and children.
The objective is to create a common network for endangered life. The coordination of the project and of the network is carried out - as agreed in the Congregational Council meeting - by the General Economat. We took up this task knowing that a network project with shared goals and mutual support lives from the participation of all members.

The project was officially opened on the 03.11.2017.
In a first step, we carried out a survey on the existing and planned activities within our Congregation.
In a first question we asked for the information of who the responsible- and contact person in the respective province / region is.  We recorded these names on a list. Furthermore, it is planned to establish a WhatsApp Group for quick information flow.

We think that the homepage of our Generalate can be a medium for the presentation and reporting about activities that already take place and those that are planned.
As of January 2019 the Provinces, Regions, and the Community will report monthly in turns on their work and the experience they make in the project.

The Dutch Community supports the work already in the second year with a financial subsidy.

We thank everyone for the valuable cooperation and look forward already now to the reports that will follow at this site on our homepage.