26. Meeting of the German-speaking Providence Sisters at the Provincial House - Friedrichsburg 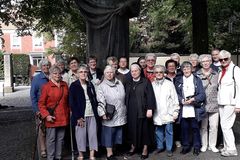 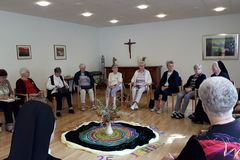 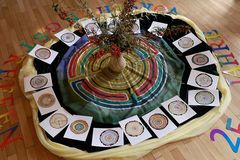 „Because you are precious to me“
„Because you are precious to me – the human (person) in the loving gaze of God’s Providence“- under this theme, the 26th meeting of the German-speaking Providence Sisters took place from 5 to 8 September 2019 in the Provincial House Friedrichsburg. It was also an anniversary meeting, because 25 years ago several providence communities met for the first time in Ribeauvillé. The founders of this type of meetings include Sr. Petra Bade,
Sr. Bonaventura Stening, Münster, and Sr. Fides from Ribeauvillé. There are now seven communities that are regularly participating.

After a long journey from Ribeauvillé, Baldegg, St. Jean de Bassel, Schönbrunn, Portieux and the Netherlands, we welcomed our guests at the train station. The joy of re-union was palpable for everyone. The evening prayer with the plaque "Creation of Man" by Lioba Munz, introduced us to the theme. On the image on the plaque, we see how God embraces the face of the human with great tenderness. God looks at the person lovingly and tenderly with big, warm eyes. This shows that "Divine Providence is love that has me in mind".

On Friday we followed in the footsteps of Cardinal von Galen. Through a film we got to know his biography and his distinctive personality. In times of the inhumane Nazi regime, he courageously raised his voice against the so-called annihilation of life that is puny.  His testimony today is an example for us, not to let up in our commitment to the dignity and value of human life, but to obey the love and mercy of God more than words of human beings.

In the afternoon we visited the funeral chapel of Cardinal von Galen in St. Paul's Cathedral and remembered the three great sermons, which the Cardinal held that time, by visiting the Lamberti- and the ‘Lieb-Frauen’ Church. Afterwards, our guests enjoyed a little stroll through the city.

Afterwards, Sister Jacqueline Barondeau (Superior General of the Sisters of Ribeauvillé) gave us a moving spiritual impulse. In particular, we were asked to listen intensively to the words, "Let us hear in the depths of our hearts: You are precious. You are a treasure. You are the Beloved of God." – Then, in group work, we were able to deepen her spiritual impulse on the text of Isaiah 43, 1-7.

The Eucharistic celebration with Dr. Michael Höffner, the dinner with all the sisters and the jovial closure in the evening rounded off our beautiful anniversary celebration. It will resound into our hearts for a long time to come.