5. meeting of the peoples of the São Francisco-Basin in Minas Gerais/Brazil 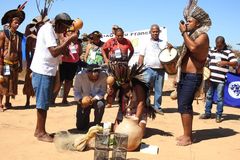 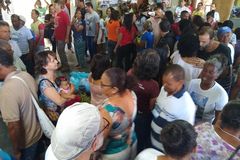 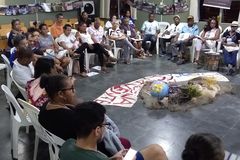 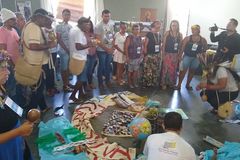 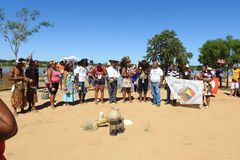 In the mirror of life: people and the river identify themselves as one single "body" in the resistance

In Januária, from 07th-09th June, 2019, the 5th meeting took place of networking the peoples that live in the São Francisco basin, on the left side of the River São Francisco, also affectionately called "the old Chico". During these days, it became clear that the people and the river identify themselves as one "body" in the fight of resistance. More than 109 people were gathered there: indigenous people and descendants of the former slaves from Africa, the members of traditional communities (fishermen and people, who have their home in the low bush forest and very dry areas), as well as representatives of the social pastoral work and social movement, also researchers and other civic groups from the four regions in the basin.

This many people, whose lives depend on the existence of the River, spoke to each other about the problems of the "old Chico". They noted that since the establishment of this "network of the peoples of São Francisco", 14 years ago, the challenges constantly grew. Reasons for this include: the environmental crime which led to real tragedies, the ultra-liberal political decisions that do not take into account the principles of prudence and prevention, the rights of the people and creation that were not considered.

The problems and the challenges that afflict the river and its peoples, constantly are increasing with time. Again and again we see how the agro-industry, mining, the projects for the production of solar and wind energy and the nuclear threat is limitless expanding. And to this, comes even much more: the deforestation of the lowlands, which leads to more siltation and the decline in the water level; the advance of the sea in the estuary, causing  salination of land and groundwater; the contamination with boundless economic activities, particularly by the agro-chemical and mineral residues; the falsification of land deeds, as well as the stagnation of the agrarian reform and the hesitation to recognize the traditional areas; the setback at the public education services (closure of rural schools and reduction of household goods) and health services; the announced reform of the social security system, of which the poor in the countryside and in the city are very much concerned.

Together, we realized that there is a death project for the São Francisco basin. This project is trying to adapt the life of the river and its peoples to the violent economic production, contrary to all ethics. Our "old Chico" is still not completely perished thanks to the constant resistance of its peoples; these peoples recognize themselves as the sons and daughters, who depend on this River.

The crime of the Company's Vale in Brumadinho/MG and the ever-present threat of further of dams in the whole State of Minas Gerais, which put the life of the river and its peoples in danger, testify to the above outlined situation. The criminal contamination caused by the Vale Company has further impact on the communities of Paraopeba up to the dam of Três Marias, as for example: lack of drinking water, devaluation, and decline of the fishing industry. Nevertheless, those responsible and the authorities assume no real and lasting solutions.

For a long time, there are the everyday struggles of the little (people) on the banks of the River São Francisco, which make a difference and thus prevent that economic politicians take the River totally in their possession. Therefore, we recognize how important it is to resist locally in an attitude of stubbornness and perseverance, in order that river, earth, water and the people survive!

With a variety of identities and with a particular peoples’ world view, who live along the river, who recognize themselves as a “Dependent Collective” and who know that their life depends on the ‘old Chico’, we "proceed with confidence, because faith - most of the time -does not fail". We continue the "networking of the peoples of São Francisco" in an effort to give a voice to hope in the daily struggle for the life of the river and its peoples.