Farewell to the Provincial House Friedrichsburg 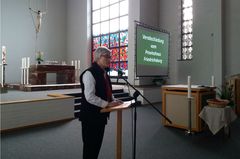 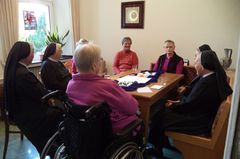 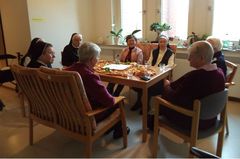 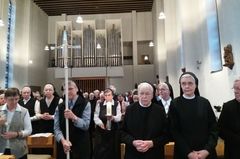 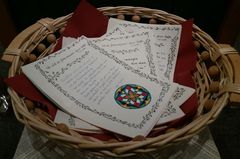 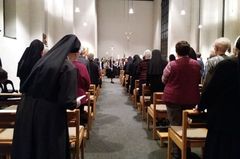 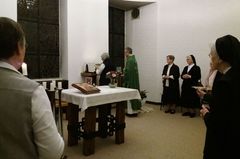 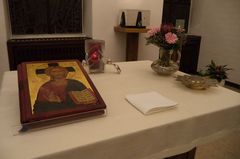 The day, November 16, 2019 – will remain a particularly memorable day for the Providence Sisters of the German Province! –  Many sisters followed the invitation of the Provincial Coordination to say goodbye to the Provincial House, Friedrichsburg on this day, because at the beginning of the year 2020, the Sisters and the Provincial Council will move into the newly built provincial house on the Offenbergstraße.

After her moving words, the Dutch sisters expressed their wishes for the day and for the future with a self-composed song. This was accompanied by a gift – chocolate in type mould, which gave the word: "Farewell to the Provincial House".
‘Haus Loreto’ gave a basket of all kinds of energizers to overcome the challenges well. Sr. Lucina had written a poem with many good recommendations.

This was followed by a PowerPoint presentation that told the story of the provincial house. Afterwards, the sisters met in many different "narrative rooms" to tell each other about their experiences and remembrances with the Friedrichsburg under the motto "Those, who remember the good things, can hope" (J.W. v.Goethe)

After lunch there were various free offers: PowerPoint presentation - time for meeting and conversation, silent adoration in the Novitiate chapel...

The highlight of the day was for all of us the thanksgiving Holy Mass in the house chapel with Dr. Köster and the members of the provincial choir. “We celebrate this Holy Eucharist as thanksgiving and departure”, Dr. Köster said. “We give thanks and take with us the most sacred and important things, Jesus, in the form of bread, the "eternal light", the ‘bush’- window, which will be removed from here and re-installed in the new chapel, as well as the great cross. God accompanies us and is already there, where we will arrive”, Dr. Köster said.

Instead of intercessions, some narratives of the sisters that they had written down beforehand – about that what touches them saying goodbye to the provincial house, what they remembered, what they want to take with them into the future - were read out and which were brought to the altar as a gift. The refrain between the respective statements was sung by the choir, it read: "Traces of light pass by through time radiate from afar into our time."
A prayer from Bernhard v. Clairvaux: "Go, I send you - leave behind the house that you have loved...“and the solemn final blessing encouraged all who were present. A few sisters and Dr. Köster brought the Blessed Sacrament in a procession to the ‘Small Chapel’. Everyone sang the song: "Exit and entrance, beginning and end, are with you, Lord, fill our hands!"..

After the procession of sisters had left the chapel with the Blessed Sacrament, the other sisters remained in the house chapel in a rather special type of silence for quite a while.

„You carry the beauty of the past,
like a precious gift within you.“ (Dietrich Bonhoeffer)