Seminar for peasant women from the Jequitinhonha-Valley 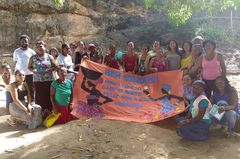 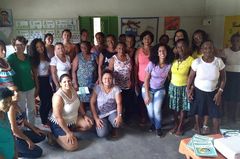 “If a woman comes forward, no man is going backwards!”
We are fighting for equal rights of women and men, who are able to build a society that is worthy of God and the whole of creation!

On the 03.-04 May, a meeting took place for peasant women in the Quilombola-community from Mutuca de Cima. About 30 women participated from different communities of the North of Minas Gerais. Also present were representatives from the country pastoral, the pastoral Council of fishermen, Sisters of Divine Providence and the Forum against violence on women.

The meeting is part of various activities of a project, which is coordinated by the Sisters of Divine Providence and by the Commission of the country pastoral: "In the process of transformation of the Manioks in sustainability: to pledge the dignity of women and allow the entrepreneurship of women!"

In their daily work with women, both institutions found out how many women - also among the leadership – were subjected to violence from their spouses and partners. The above mentioned project wants to contribute through education to the freedom and dignity of these women, and thus in building a better world.

In this first meeting, starting from the experience of the women, we have raised different questions: gender identity, feminism, domestic violence, laws for the protection of women (difficulties and ways of achievement). We spoke also about difficulties that we experienced now in the present Government Bolsonaro, for initiatives to combat violence against women are neglected, but statements against women and minorities, as well as racism are on the increase.

The meeting was perceived as a very good opportunity, to get as women into a conversation with one another. There was a mixture of feelings among the participants: solidarity and tenderness, pain and fear. They remembered their experiences, on the roads towards liberation that they already have gone or that they still have to go in order that the cycle of violence can be broken and overcome.

We went from this meeting with a commitment to inspire people around us with the hope that it is possible to build an egalitarian world for women and men.

Some Echoes:
"If I would have had the opportunity in previous years, to take part in meetings like this, I surely would have not had experienced so much violence."

"When I had to divorce myself from my husband, because I no longer could bear it, I had to raise my six small children with great difficulty and with much effort. I do not regret that. I'd do it again, because it was worth it."

“I have many problems, but joy is the solution.”

Photos: Archives of the Commission of the country pastoral of Minas Gerais