THE NETWORK – A CRY FOR LIFE 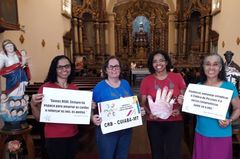 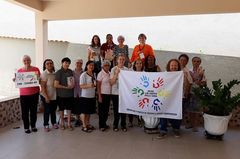 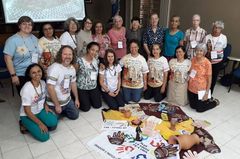 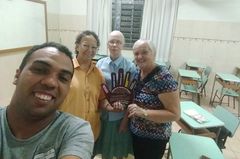 „For freedom Christ set us free“ (Gl 5,1)
On the ground of Mato Grosso, the cry continues to be heard: Say 'No' with regard to the trafficking in human beings, to violence against women, sexual abuse and exploitation and slave labor!

The Department of the Brazilian religious Conference (CRB) in Cuiabá/MT, Brazil that is responsible for the "network a cry for life", the social movements and many people from the company of Cuiabá have had a beautiful celebration at the 08.02.2019 in memory the Saint Josefina Bakhita. The Eucharistic celebration was held at 19:00 hrs in the "parish of Rosário and São Benedito" in the District of Bandeirantes in Cuiabá/MT. Fr. Pedro Canísio Schröeder, a Jesuit priest, presided.

The day should also be a world day of prayer and reflection against trafficking in human beings, in order to sharpen the awareness in the society considering the serious problem that affects thousands of people in our country and in all continents.

Several partners were present: the grassroots-communities (CEBs) of the Archdiocese of Cuiabá, the Centre for biblical studies (CEBI) from Mato Grosso, the indigenous missionary Council (CIMI), representatives of various groups such as the solidarity economy and the Commission for Justice and Peace, as well as some religious people from different communities and a significant group of providence sisters.

The group "A cry for life" from Cuiabá/MT was founded in the year 2018 with a commitment that all the forces of the Church and civil society would unite in dealing with victims and combine through various activities the awareness, prevention, and political influence.

In the process, some measures were envisaged:

St. Bakhita experienced herself slavery and exploitation in her life, because she was taken prisoner and sold on the market of El Obeid by merchants of black slaves. Just like many slaves, she too, underwent humiliation, physical, psychological and moral suffering.

Josefina Bakhita entered a religious congregation in the year 1896. She was admired by the sisters and residents of the town for her humility, simplicity and joy. At an older age when she fell ill from a long and painful disease, the agony of the terrible years of slavery came back to her memory. She died on February 8, 1947, after a long illness.

Bakhita was beatified in 1992 by Pope Johannes Paul II and canonized on October 1, 2000. Eva Tobias da Costa, a Brazilian from Santos/SP, who had prayed to Bakhita has been cured miraculously in 1980.

To celebrate St. Josephine Bakhita means to celebrate the memory of so many lives, especially of women and children who are victims of human trafficking. Mato Grosso is a true open corridor for this trade, when one considers the huge dry border, which facilitates easily the passage in other countries.

May the example and witness of St. Bakhita arouse in each one of us the commitment to defend and promote life, for the sake of God’s Kingdom, and say:
Yes to life!