Admission to the novitiate in Latin America 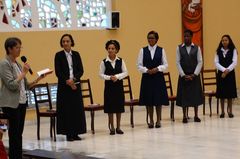 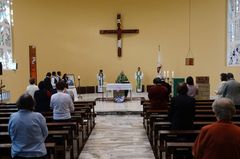 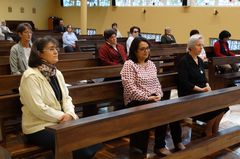 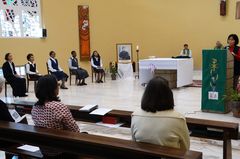 In this important time of our history, we were enriched on 8 June by the admission of five young women to the Latin American novitiate of our congregation: Edicleia Batista Reges, Elisa Wiradi, Fernanda Fernandes Pinheiro, Giovana da Silva Brito and Thais Fernandes de Souza.

The admission celebration took place during the holy Eucharist under the chairmanship of the Rev. Wilson Groh in the Holy Trinity Church in the Heart of Jesus Provincial House in Florianopolis. The Rev. Vânio da Silva and the Rev. Wellington Cristiano da Silva concelebrated. Other participants in this celebration were: Sr. M. Beatriz Mohr – Member of the General Coordination, the Provincial Coordination: Sr. Sandra Roaris, Sr. Sandra Maira Pires and Sr. Beatriz Zanata, Sr. Cleusa Maria Andreatta - Advisor of the Latin American Formation Team, Sr. Maria Eloni, who gave the Retreat in preparation for the admission into the novitiate, Sr. Rita Maria Küster, who accompanied the young women in their formation process during their postulancy, sisters of the novitiate community and sisters from the communities of the Provincial ate.