Celebrating the 180th anniversary of existence of the Congregation – Malawi Region 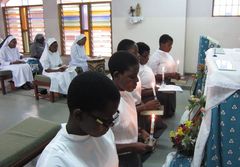 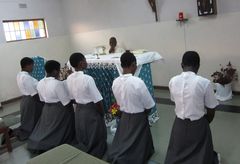 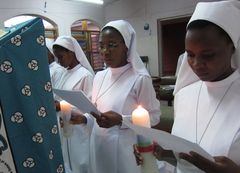 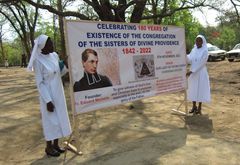 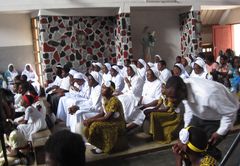 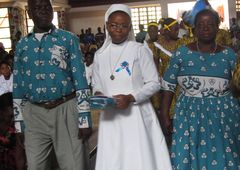 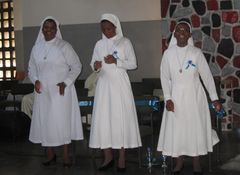 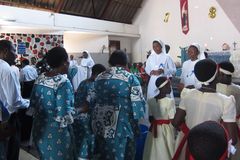 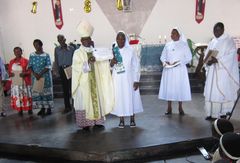 On the same occassion, the eight junior sisters renewed their vows as Follows: Sr Margret Gama renewed for one year, Sr Jessy Chimkwita, Sr Manes Piyo, Sr Bertha Ntameli and Sr Jacquiline Emeliana Mwamadi renewed for two years, Sr Emmelleciana Saizi, Sr Dina Komicho and Sr Anastansia Paul Nkozomba for one year. The celebration was conducted in the evening of the day at Eduard Michelis Formation house in Nantipwili in the Archdiocese of Blantyre. It was presided over by a Montfort priest by the name Fr Anthony Chilolo who is also the Parish priest of Martyrs of Uganda- Bvumbwe parish where Eduard Michelis formation house belongs to. In his well composed homily, Fr Anthony Chilolo as a particular advice to the new postulants, the junior sisters who were renewing their vows and indeed to us all who were witnessing the occasion, he said; in religious life we must target to catch kalulu (the hare) and by no means of letting it hide or run away from us. Thus, always we must be clever and strong enough in the faith in Divine Providence so that we are able to strive for and reach our final destination safely.
Eventually, the celebration reached its climax by the serving of food which was prepared in a simple manner but very appetising and rich in all sorts of nutrients and vitamins. Only few neighbourhood were present for this sharing of the physical bread. Spontaneously, almost everyone present danced with joy that through Fr Eduard Michelis, the Congregation was born for us to join and serve the Lord through His people.

The following morning of the 4th November2022, every sister of Divine Providence in the Region moved out of her comfort zone and rushed to Muona - Fatima Parish.  Despite the fuel crisis which Malawi as a Nation is experiencing and the Religious communities are inclusive, we had to travel to this historical place of our Congregation for the apex of the 180th anniversary celebration on 5th November 2022. The Holy Mass’ Procession stepped in Fatima Parish Church at exactly 9;30 am. In front of it, the two Sisters of divine Providence; Sr Margret Gama and Sr Jessy Chinkwita held the Congregation’s beautiful Banner.  It was the great day when our dear Novice Rhoda Limani after an eight days retreat and completing her period in the Novitiate Formation House for the required years and still convinced by the love of God that calls her every day, offered her life to God through the profession of her first vows. Sr Rhoda Limani is the second born daughter in the family of three children; two girls and a boy. She was born on 10 th October, 1997. She comes from the eastern Part of Malawi; St Theresa - Liwonde Parish in the diocese of Zomba. She has been appointed to go and serve at Trinity convent in Muona.

A Proper discernment was done by one of the Junior Sisters in the Region, Sr Grace kennedy Tsoka who after her five year serving as a junior had requested to do her final Yes to God in the Congregation. Therefore, she was accepted to offer her life to God on this memorable day of our Congregation. What a blessing for her and everyone in the Region/ congregation! She did her final vows on this great feast of our Congregation when we were celebrating the 180th anniversary just as she did her first vows when the Congregation was also celebrating 175th anniversary on 18th November 2017. Sr Grace Kennedy Tsoka, is the fourth born daughter in the family of six children; four girls and two boys. She was born on 13th March, 1988. She comes from the southern region of Malawi (the Lower Shire); Ngabu Parish in the diocese of Chikwawa. Meanwhile, she has been given an opportunity to go and re-study for the Malawi Senior Certificate of Education (MSCE) so that she can be in a better position to go and study further in the tertiary education, therafter, becoming a competent and capable servant of God in a particular field of her career choice, as well as the Congregation’s needs.

The Eucharistic celebration was graced and presided over by the Rt Rev. Bishop Peter Musikuwa of the diocese of Chikwawa and co-celebrated by a few number of priests of the diocese and the neighbouring dioceses. In his homily, the Bishop said; “just like Fr Eduard Michelis our founder was so merciful and touched by the social misery of the then people, we the Sisters of Divine Providence are his today’s ambassadors so that God’s kingdom may continue to reign all over. We must not get tired of helping the poor and the orphans; for by doing such apostolic services, God and our Founder are well pleased and we can never miss out God’s blessings in our services.”

As a sign of much appreciation to what the Congregation of the Sisters of Divine Providence have been doing in the area, the ceremony was also witnessed by the different Village Headmen. Joyfully they danced with their little gifts offered to the Congregation during the Holy Mass. Many Christians from St Anthony Chinyonga also did the same and we felt a great support from them.

It was a very great honour to the above mentioned people to be recognised by the Congregation/ Region in such a manner and they had really so much appreciated. Although the day was so hot as if it did not rain heavely in the Saturday’s wee hours, we had a very long memorable day. All the invited guests together with the clergy gathered in the Cuppen Hall for the luncheon and the 180th anniversary cake cutting whilst all other People who came to support and witness the occasion were dispersed in their various arranged places where they were well taken care of. The Wednesday group of old and poor, the Children from Sr Eltrudis Day Care Centre were also not spared for the food. Some Christians from within the Fatima Parish catchment area, prepared the usual Cultural dance of the area commonly known as Utse outside the Church whilst the Sound system was being played softly and swiftly in the hall.

Gradually, people began disappearing from the Celebration premises at the sunset.  We thank and trust God for His Persisting Providential care and guidance for the Region/ Congregation to move forward despite some hiccups we might face on the way. We also thank God as He keeps on blessing the Malawi Region with the young women to join the Congregation. This assures us of the future of the Region and indeed of the entire Congregation. May Fr Eduard Michelis-our selfless founder and all the departed souls of our departed Sisters in the Congregation continue interceding for the better services of our Congregation!