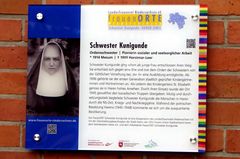 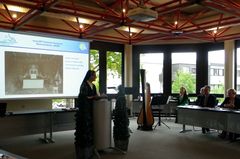 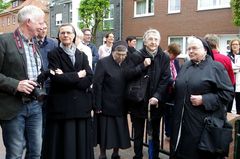 ‘frauenORTE’ want to highlight  the life and work of important historical women figures.
"Through the initiative of frauenOrte-Lower Saxony, women's history and women's culture should be anchored more firmly in the cities, regions, and last but not least in the country."

Therefore, the fortieth "frauenORT Sister Kunigunde" was opened in Haren/EMS on May 17, 2019.

A representation of five Providence Sisters took part in the opening ceremony. Sister Kunigunde is recognized as a pioneer of social and pastoral work.
Her outstanding deed happened towards the end of the Second World War. When the residents left Haren, because they expected a heavy bombardment on their village, "Sister Kunigunde climbed on her own initiative the tower of St. Martinus, parish church, hoisted a bed sheet as a white flag, and thus prevented the sure destruction of the the Church and the village by the approaching front of foreign soldiers."

First of all, a "frauenORT Sister Kunigunde" plaque was unveiled by the children of the kindergarten St. Elisabeth. The Rev. G. Bültel blessed the memorial plaque and the Deputy Head of the kindergarten recalled the work of Sr. Kunigunde and that she is still even today a role model of courage and engagement of a woman.
With the song "Strong children... strong women..." the kindergarten children triggered a strong response among the guests.

After this ceremony, the guest walked to the Town Hall. They passed along the places of work of Sr. Kunigunde in Haren.
The official opening of the "frauenORT Haren/EMS" took place in the Town Hall. First, the Mayor M. Honnigfort welcomed all guests and paid tribute to the intensive research of all, who were involved in the creation of the "frauenORT Sister Kunigunde". Greetings were delivered by Dr. Biermann from the Lower Saxony Ministry of Social Affairs, Health and Equality, and by Mrs. Övermöhle-Mühlbach, as the Chairwoman of the National Council of women of Lower Saxony e.V.
Sr. Ansveris extended greetings on behalf of our Provincial Coordinator, Sr. Paula, and thanked all for the appreciation, which Sr. Kunigunde received, and through her also the Congregation of the Sisters of Divine Providence.

The Laudatio was held by Priv. Doz. Mrs. Dr. Maria Anna Zumholz - Deputy Head of the Centre for Catholicism - and resistance research of the University of Vechta.
She paid tribute to the Congregation of the Sisters of Divine Providence, Münster, for their pioneering work in girls- and women's education, the engagement of the Providence Sisters in the region ‘Emsland’, and then, of course, of the social and pastoral work by Sister Kunigunde.

Then the equality officer of Haren, Mrs A. Schepers, gave a forecast of the activities which will be done at the village in the near future.
All guests were then invited to a social gathering with snacks and taking a taste of the new biscuit creation: the "Kunigunde cake".

The art circle Haren e. V. invited everybody to create an image on the subject of "frauenORT Sister Kunigunde".