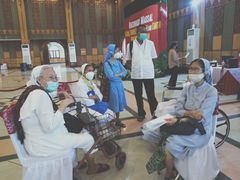 The Indonesian government has made several efforts to prevent the spread of the Corona virus. Public officials and religious leaders are given priority to receive the anti-corona virus vaccine.

On Wednesday, March 10, 2021, at the Biggest Mosque of Central Java, the President of the Republic of Indonesia, Joko Widodo, directly monitored the activity of the vaccine that involved many public figures. Public servants, including religious, receive priority vaccines because of their daily work of direct interaction with large numbers of people. Many religious leaders died in Indonesia from being infected with the corona virus. This is due to one of its functions of accompanying and visiting corona patients or accompanying funerals.

The communities of the Sisters of Divine Providence are participating in the joint movement to contain the pandemic. The Sisters responded well to the vaccination offer.

Several Sisters have participated in this government program since morning and attended an audience with the President of the Republic of Indonesia: Sr. Grace, Sr. Anna Marie, Sr. Agusta, Sr. Christina and Sr. Yohani.

This program was also attended by representatives of religious leaders, including Muslims, Hindus, Catholics, Protestants, Buddhists, Confucians and other believers. Also present was the Governor of Central Java, Mr. Ganjar Pranowo.

Thank goodness, the vaccine's activities are going well. The service was characterized by a family atmosphere. Differences in belief are not a barrier to helping each other in efforts to prevent the spread of the Corona virus.