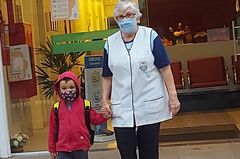 One of the little boys from the children's home, run by us, the Sisters of Divine Providence, attends the school "Madre Josefa", which is led by the Missionary Sisters, Servants of the Holy Spirit.
For us, as well as for the Sisters, the Servants of the Holy Spirit, this is a fact of great importance.
Much seems remarkable when we look at the historical facts and relate them to the present. Then a strange feeling arises that raises questions, which stimulates our faith and leads to the certainty that God always surprises us because we believe that it is He who leads history and writes the history with us.

Let's get to the facts: In 1878, during the ‘Kulturkampf’, about 9,000 Religious were expelled from Germany, including our Sisters of Divine Providence. They went into exile in Holland, where they were well received and began a new period of growth and missionary expansion. In 1882, some Sisters of Divine Providence worked in the kitchen of the seminary of the 'Missionaries of the Divine Word' in Steyl, Holland. Arnold Janssen, the founder of the ‘Steyler Missionaries', lived with some confreres in this seminary. He wanted to found another missionary congregation for women. This became known to the public and attracted the attention of some young women who wanted to participate in this far-reaching mission project. Thus, Maria Helena Stollenwerk (Mother Maria), Hendrina Stenmanns (Mother Josefa) and other young aspirants came to the seminary of Steyl and the Sisters of Divine Providence were given the task to assist in the formation of the members of the new Congregation, called the "Missionary-Sisters Servants of the Holy Spirit". The Sisters of Divine Providence continued to work in the kitchen, and the young women were responsible for cleaning the house.

The formation process lasted for seven years, always combining work – cleaning the seminary - and formation for missionary religious life. It was an arduous job that made those involved to start day after day at dawn. Strong women, courageous and sensitive to God's call, have allowed to let themselves be formed in a way that are unimaginable in our times. The dream of this missionary project came true; both congregations flourished and developed in Mission areas and throughout the world.

From Steyl to Brazil - Bairro Fátima, Canoas/RS: Even after 140 years, life is shaped by these two congregations, which are never tired of witnessing to the love of God in their service. Both religious congregations have produced many fruits in their Missions tasks, and they continue the process of faithful pursue for the project of the Kingdom of God, tirelessly and renewed. Today, in Bairro Fatima/Canoas, we can count on the missionaries of the "Servants of the Holy Spirit" who run a day care center named after ‘Mother Josefa’ and on a community of ‘Sisters of Divine Providence’ that have established and maintain an Institution - the ‘Divine Providence Network of Social Action and Citizenship’ (REDIPASC), an overall charitable and social project whose Mission is to promote the care of life, social protection, the exercise of civil rights and integration.

Among other things, REDIPASC offers the service of special protection in 4 children's homes. Each home has the capacity to care for up to 10 children and adolescents – aged: from birth to 18 years. The children were admitted in this facility because they were placed under special protective measures by the Children's and Juvenile Court.

Coincidence or God's ways?
On October 2, 2021, the Day of the Holy Angels, one of our little ones, three years old, was admitted to the Mother Josefa Day Care center of the Missionary Sisters of the Holy Spirit. For us Sisters of Divine Providence, who are responsible for the Institution, this encounter is not a coincidence, but a milestone in a history that deserves to be remembered and re-read in order to understand how amazing are the ways that have taken this blessed development through the work and grace of God.