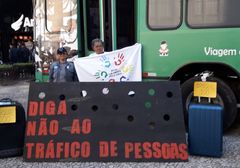 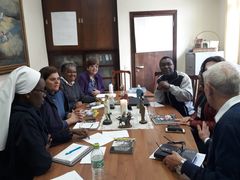 I'm Sister Marfiza Marcelino da Silva, I belong to the Holy Trinity Province, Curitiba. Since 2015, I work as a volunteer at the migrant pastoral ministry on three days a week, with a full-time job. The migrant’s pastoral ministry is coordinated by the scalabrinian priests, who are also active in the parish of St. Joseph, the district-quarter "Santa Felicidade"- Curitiba/PR. The mystique that characterizes this pastoral is the text of Matthew 25.35: "I was foreign, and they accepted me" The motto of the actions is called: “grant hospitality, protect, promote, integrate and celebrate".

Every day, we receive migrants from different countries, who come to us. During the years 2015 and 2016, a large number of Haitians came to Curitiba to seek work.  Except for Haitians, many Venezuelans came also to Brazil to survive there, in 2017 until now, 2019. Many of them were received by the migrants’ pastoral ministry. We have also people from the Congo, Syria, Cuba, Uruguay, Angola, Argentina, Paraguay, Colombia, Chile, Peru and Mexico that come to us.

We are eleven people working in the migrant’s pastoral ministry. Two are lay people, staff members who are full time professionally active, nine work voluntarily there. A Priest, missionary of the Scalabrini, is one of nine volunteers and three are sisters from different religious congregations. (Sisters of Divine Providence, Sisters 'Apostle of the sacred Heart of Jesus' and sisters of St. Joseph of Chambery).

The pastoral work consists of welcoming people, of listening to their life story, helping them to fill in the application form, providing instructions for the regularization of documents in Brazil, giving instructions and explanation to the health system. Sometimes, they must also be accompanied to the camp, where they get the first aid for their health. They need to be guided how they get into the labour market. They are taught the Portuguese language; the families are visited; we are helping them to solve problems with conflicts that are caused by lack of language-understanding. Some were in the migrant’s prison. In the event of death, the entire processing of documents to release the body is done. We provide religious support through prayer, through the Eucharist, baptism, weddings, and a testimony of their faith for the arriving migrants; we give not only material but also spiritual support.

In addition to this migrant-pastoral ministry, I work also in the "network a cry for life". This is a movement of the religious Conference of Brazil (CRB), with a link to "TALITHA KUM" – a network of the International Union of General Superiors (UISG).

In Curitiba, the "NETWORK A CRY FOR LIFE" and the MIGRANT’S PASTORAL MINISTRY work close together. Each month, the members of these two groups meet to pray together, to exchange ideas, to evaluate and to plan actions to combat human trafficking and slave labor.

The "network a cry for life", works in the fight against human trafficking. In the State of Paraná the network maintains a partnership with various bodies/groups, such as the Centre for combating the trafficking in human beings, the national transplant centre, with the Archdiocese of Curitiba, with the international airport, with a group of young people and with the federal police to combat the sexual exploitation of children and adolescents.

Seven people (three priests and four sisters) are in this group. We participate in seminars, conferences and lectures. We distribute leaflets in places and at times, when there is the largest passengers flow: at the airport, bus station, on the market, on roads, schools, churches and factories. Our goal is the family; particularly the adolescents and young people are made aware of the big problem of human trafficking.
One of the actions of the network is to support and to listening to women. In the year 2018, in Brazil, 536 women were physically beaten per hour. Assaulted women wear these violations, particularly the emotional wounds, for a lifetime. To liberate these women from it is very difficult. The pain of the soul is great. They feel broken. To listen to these women and try to rebuild their self-esteem and their dignity is crucial for the recovery of their life.