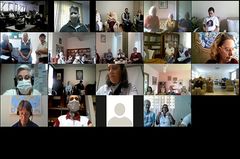 It happened in the Provincial Assembly, of the Province of the Holy Trinity, online, on the 27th, 28th and 29th of October.

We had three lectures:
The first day with the theme: “Ecology, spirituality and personal and cosmic relationships”, taught by Sister Helena Terezinha Rech, Servants of the Holy Trinity. She spoke of the interconnectedness of beings created by God. “We belong to a “universal community of life  created and sustained by God. There is an interaction between us, human beings, and nature. Our body and brain are composed of the same particles that weave the brightness of galaxies that burn in the sidereal depths. It is impossible to establish a clear separation between human beings and the universe”.

On the third day we had the presence of Mr. Ildo Benincá, who took up some issues reflected at the level of Latin America, and reflected with us the financial impacts of the Province caused by the crisis experienced worldwide as a result of the pandemic-Covid 19.

As a conclusion of these reflections, the communities made commitments to intensify the care of the planet.
Sister Beatriz Zanatta closed the Assembly by proclaiming the Province's Horizon and Motto for the five-year period:

"Confident, we go out in defense of life, as mystical-prophetic Religious Life".