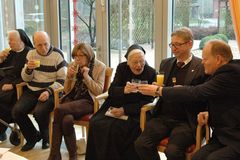 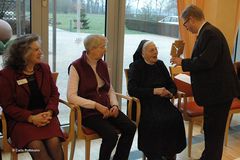 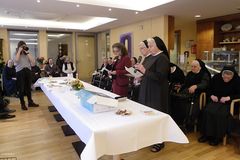 cr. Horstmar-Leer. On Sunday, Sister Radegundis, born as Maria Hardy, celebrated her 100th birthday together with her fellow-sisters. Among the guests of this special day, was also the Mayor, Mr. Robert Wenking. He conveyed the congratulations on behalf of the city and gave Sr. Radegundis a flower bouquet and a gift-certificate for the village shop. Also the Parish Deacon, Johannes Büll, congratulated the sister and brought her a special cross.

The Sisters of House Loreto were particularly pleased that Elisabeth Veldhues came on behalf of the Count of District Steinfurt to convey his congratulations. She brought with her Münsterland Specialities, over which Sister Radegundis was very happy. Elisabeth Veldhues also read a letter from the Minister of NRW, which stated "it is the account of the personal stories, such as yours, that make up our country".
Also Reverend Father Andreas Laizer from Borken-Gemen came to congratulate. Sister Radegundis had worked many years together with him in his parish community.

And last not least Sister Elizabeth from the provincial coordination, as well as some sisters from Münster and the Provincial House Friedrichsburg, were present on this special occasion, conveying congratulations on behalf of the German province and their personal well wishing.

All of them saw a very contented Sister during the birthday ceremony in the cafeteria. It was a joyful gathering, were they sung together, and some sisters had prepared various presentations.

Sister Radegundis was born on a farm in Stadtlohn. There, she grew up with her sister, who also later became a nun.
Sr. Radegundis still remembers the Past very well. She described how she had to help on the farm and that at that time everything was done by hand, not as now-a-days, where all is done with machines. She also has still many memories from the hard and difficult time of the war.

Sister Radegundis joined the Congregation of the Sisters of Divine Providence in Münster on October 24, 1946. She took her first vows on May 10, 1949; and on April 18, 1954, the perpetual profession. Sister Radegundis has worked in many places: in Coesfeld, Gemen, Kevelaer, Gladbeck and 16 years in Stadtlohn.
Since October 30, 2012 she is in House Loreto and enjoys life in the community of the sisters there.

With many songs, in which it read:” Rejoice over every hour, because life is so beautiful", the sisters wished their fellow sister the very best and to continue in good health and with a contented heart.