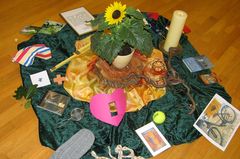 Under this motto, which was chosen for the forthcoming provincial chapter, the delegates of the German province gathered for a first meeting in Haus Mariengrund, Münster, on the first weekend of September

On the first evening there was an opening round of exchanging symbols, followed by a spiritual introduction to the Bible passage Joh, 5, 2-9 the next morning. It is the passage of the Gospel where John reports on the healing of a paralytic.
By transferring the text onto the personal level, those present were well able to get involved with the motto. "Stand up... and go" - in trust, hope and joy!

In preparation for this meeting, four subject groups were formed and a written working template was drawn up. Thus, the areas of spirituality, mission, formation, and organization of the province could be discussed intensively on the first day. Suggestions from the large plenary were taken up for further work by the relevant subject-groups.

The before sent report by the provincial leadership on the life and actions in the province over the past six years was the focus of discussions on Sunday. During this reflection, there were helpful comments and hints for future tasks.

The contents of this meeting will now be discussed in the province by the delegates of the relevant subject groups, so that many sisters can tune in to the upcoming provincial chapter.