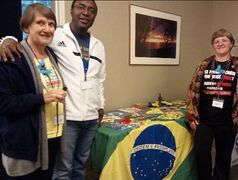 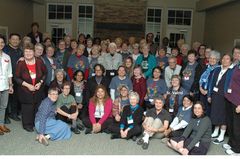 The network of Catholic sisters in the United States against the trafficking in human beings organized a meeting for religious women in the entire Western hemisphere to unite in their shared service for combating trafficking in human beings. The meeting took place in a retreat center in Cleveland, Ohio – United States from 24th -27th October 2018. Presentations from all networks, survivors, invited as speakers, virtual classroom and group reflections allowed participants the sharing of good experiences and to strengthen the cross-border links.

The Brazilian network "A cry for life" was represented by Sister Valmi Bohn (Sister of Divine Providence from Manaus), Father Luiz (from Curitiba) and Sister Joanne (from Maceió). We took off from São Paulo on 22nd October. After a 10-hour flight to Detroit, and another hour to Cleveland, we arrived at the 23.10hrs in the morning. We were greeted by the Sisters Ann Oestreich and Sister Anne Victory, who both spoke only English. We communicated us with gestures and some Spanish and arrived well at the place of the meeting.
Eight networks of religious life, representing more than 1000 sisters and some priests from Canada to southern Argentina gathered together in Cleveland, Ohio, to proclaim the major theme: "BORDERS ARE NOT A BARRIER" in their joint work against human trafficking.

All of these networks are members of Talitha Kum, the worldwide network of the consecrated religious life. Sister Gabriella Bottani, Director of Thalita Kum in Rome, was also present and encouraged the cooperation between members of the various networks.

For the Future we want:
•    To build solidarity and strengthen the connection and communication among the networks.
•    To sensitize the awareness of other people for the prevention work against human trafficking.
•    To support and enable each other in order to influence the larger systems in which we work, and thus to stop the crimes of human trafficking and to support the survivors.

In addition to these three points other options were mentioned which each group will deal with within their means: common prayer on February 8, the day of St. Bakhita (Patron Saint against trafficking in human beings); Exchange of biblical reflections on the subject of human trafficking; Up-dating the network database in Talitha Kum;

Cooperation between the networks, particularly at the borders; Searching for resources to support the maintenance of networks.
During the meeting, each network shared the reality of human trafficking in its country. Some general and systemic causes of this global crime have become obvious, e.g. the link between trafficking and migration; the flow of migrants who arrive without papers on the border of all the countries of the hemisphere, particularly on the border between Venezuela and Brazil, and countries of Central Amerika, Mexico and the USA; the poverty and the Patriarchal-Machismo system in the entire hemispheres.

Trafficking in human beings takes place not only between countries, but also within them, with many domestic victims. Women and Girls are most vulnerable to human trafficking.

In this meeting "BORDERS ARE NOT A BARRIER", we noticed that all phases of the work against human trafficking, as well as the prevention work with Governments and the Civil- society partnerships are important, necessary, and very effective.

It was a very rich experience, which helped us to get a comprehensive insight into the whole issue of human trafficking in North, Central and South America. It was also important to feel and to recognize the enthusiasm of so many sisters and brothers in this fight against human trafficking.

May we always take this serious situation of human trafficking, which claims so many victims, and which is very present and rooted in our reality, into our prayers.
May Holy Bakitha bless and protect us always!