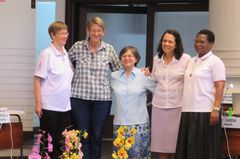 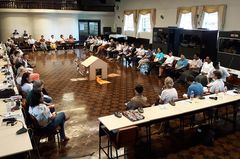 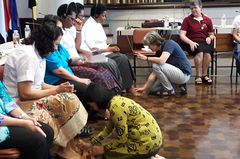 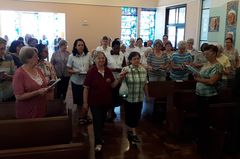 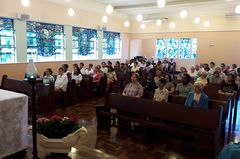 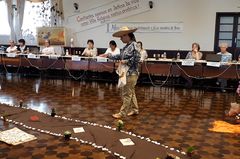 We started the fourth week of activities of the General Chapter with the process of electing the new General Coordination team.

On January 27th, we held a farewell event for the General Coordination team of the term of office from 2015 to 2020. Thank you, Sr. Márian Ambrosio, Sr. Lydia Liong, Sr. Lucia Weiler, Sr. Maria Rita Xavier Mendes and Sr. Christa Brünen , for the dedication and loving service to our beloved Congregation!

Then we began the process of elective discernment. The theological advisor, Sr. Annette Havenne, ism invited the capitulars to focus on the team that will help the Congregation for the next five years, and to think not only of a star, but of a constellation. It is not about shining anymore, but shining together. As a team, there are many good things that we can accomplish together.

In this process, we reflected on the Gospel of John 12:1-10 - “The anointing of Bethany” and we were invited to look mainly at Mary's gestures. Like the community of Bethany, we are also a community of faith, brought together because of Jesus, among the poor. This was visualized through a significant gesture: One Sister from each continent and from the General Coordination anointed the feet of each of the Chapter members.

Dear Sisters, thank you very much for your willingness to accept this noble task! May the blessing of Providence accompany you on your new mission!