Our participation at the anniversary celebration of the Sisters of Divine Providence in Ribeauville, France 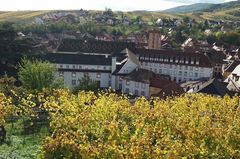 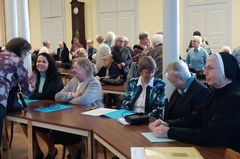 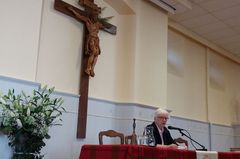 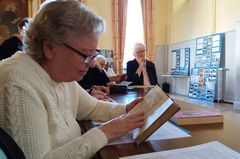 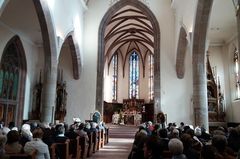 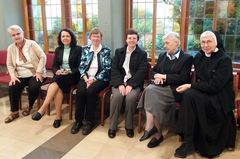 On October 26, 2019, we attented the celebration of the 200th anniversary of the Sisters' presence in Ribeauville, France. Sr. Márian Ambrosio, Sr. Maria Rita Xavier Mendes, Sr. Christa Brünen and Sr. Luzia Koch represented our congregation on this anniversary. Other Congregations of Providence Sisters from France, Belgium, Germany and Switzerland also took part: from St. Jean de Bassel, Portieux, Gap, Champion, Mainz and Ingenbohl. It was a day of celebration, of encounters among the sisters and of an encounter with history, even with our history, for which we are very grateful!

At the welcome, Sr. Jacqueline, General Superior of the Sisters "de la Divine Providence" of Ribeauville, spoke about the importance of such a birthday party: "Remember a founding project; being alive today in order to continue this project; proceeding, trusting in God's Providence".

This was followed by some impulses/presentations, which enabled us to have a historical remembrance of the emergence and development of this congregation, which Fr. Louis Kremp founded in Molsheim in 1783 for the education of poor girls from the countryside.  After a festive lunch, we gathered in small groups to discuss some excerpts from documents of the congregation.  The highlight of all the celebrations was the Eucharistic under the chairmanship of Fr. Chanoine Bernard Xibaut, Chancellor of the Diocese of Strasbourg.

Note: We read about our attachment to this congregation in the book: "Die Genossenschaft der Schwestern von der Göttlichen Vorsehung zu Münster i. Westf. – Ihr Werden, Wachsen und Wirken– 1842-1928". It says there:

"With a clear vision, Michelis recognized how meaningful it had to be that the young congregation would get a thorough introduction to the spirit of monastic life. So he turned to the Sisters de la Divine Providence in Rappoltsweiler in Alsace with the request that they would take over the training of the first novices of his newly founded congregation.  Only three weeks after the foundation of the congregation, Michelis sent three aspirants, accompanied by him, to Rappoltsweiler to be introduced to the spirit, the establishment and management of a monastic community."