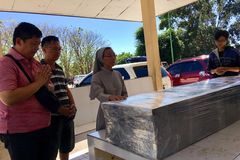 The service is not easy, it is even very dangerous, because we go against a real group of the Mafia that is trafficking in human persons in Indonesia. But I'm confident, because I am not alone. God's Providence accompanies me and gives me strength in the cooperation with the networks.

I started with this work against trafficking in human beings in 2012 after I participated in a training course about action against human trafficking. This training was coordinated by the Commission against women trafficking. It is one of the activities of the Association of all Indonesian religious sisters. In 2015 I had a request from the "Shelter Bambu Apus", which belonged to the Ministry of Social Affairs, to accompany 120 children and adults, who should be sent to Malaysia to work there. Thank God, this plan was cancelled. The social services of the province of East-Nusa Tenggara accepted them and gave them an opportunity so that they could learn skills in craft-work before they returned to their families.

With the motto "Dul in Ultum - go to the deeper" I discovered, the more I go in depth, the more I find the problems of migrants. The problems include among others: the workers are being mistreated by the employers; they are sick because of malnutrition; they have excessive work without sufficient food; they are in depression or stress; they're sick of HIV or TB. There are even workers, who have died of accidents, because they were too weak because of malnutrition. It is very sad to know that some people from the Government, who are employed in the Immigration Office, or employees in airports, even within the police, are involved.

Almost every week, I must take a dead migrant from Nusa Tenggara Timur. Most of them are women, young women, who died during birth-giving of a child. Many have died due to an accident at work. Most of them have no valid documents as workers from abroad and they were afraid of the police, if they would report themselves ill and/or were hospitalized.

In cooperation with the networks, we strive to bring back the dead to their family. This cooperation is already for more than two years.

Sometimes, the dead are even used to get a profit. The services in Malaysia and Indonesia that sends the dead to their families, require a lot of money from the families of the victims, about 20-30 million Rupiah (ca. €1.245,00 – 1.860,00). They don’t help them, instead make more problems. Actually, the Government should be responsible.

I also attend the preventive program. We accompany young people, so that they can know about the danger of trafficking and develop their skills as far as possible. We work together with the Church in Kupang, Indonesia. We support the movements of the team JPIC (Justice, peace and integrity of creation) in the Diocese of Kupang.

This year, I was asked by the "Konfrensi Wali Gereja Indonesia' (Indonesian Church Conference) to become a member of the Commission 'Justice and peace for the migrants'. I am grateful that the Indonesian province has sent two more sisters to this program against trafficking in human beings.

Let us stay together in solidarity, and may God bless us.