Further News from the common Network 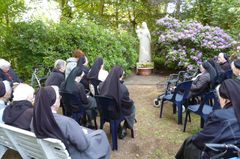 The network started officially on 3rd November 2017 on the 175th - anniversary of our congregation.

Meanwhile, after we did a survey on the activities that we already do in promoting more life for the poor, for people living on the margins of society, in promoting justice, peace and solidarity in our provinces and regions, the common network has adopted more structure and especially in Indonesia, as well as in Latin America, several sisters are actively engaged to help victims of human trafficking, of prostitution and to assist homeless people. They accompany these people and help that they can be integrated in their community to lead again a dignified life. Each province/region has now appointed a contact person for the network and there's a project coordination team, based in our Generalate.

For the German Province - with the dwindling number of younger sisters - this ‘prayer-apostolate’ of the sisters is the most important contribution to our international network.

Through means of our magazine 'Horizonte' we therefore report again and again about activities of our sisters, who are directly engaged in the common network to promote interest and a bond of unity. We draw attention to special days of prayer, such as E.g. the world day of prayer of women, the Memorial Day of Saint Josephine Bakhita, (February 8) the Sudanese saint, who became the patron saint of victims of human trafficking and of all those who assist them; or we report on topics that deal with promoting justice peace and solidarity.

For many years already, we support through our membership networks and organizations that pursue the same objectives; among others these networks are: SOLWODI, erlassjahr.de and NAD.

In this way, we believe that we give a contribution to greater justice and a more dignified life.

Sr. Virgo
Contact person of the German Province
for the common international Network for the defense of life